Skip to content
Why Wait!? Both in clinic and Telehealth treatments available in Oregon. Give us a call to get started!
Eugene Pelvic Wellness Center > Services > Pelvic Pain

What is Pelvic Pain?

According to the International Pelvic Pain Society (IPPS), chronic pelvic pain is one of the most prevalent medical complaints among women. Often difficult to classify, pelvic pain most commonly consists of pain experienced in the pelvic, vaginal, and/or rectal regions of the body. Sometimes, pelvic pain can also radiate into areas as high as the abdomen or as low as the upper leg.

Persons suffering from pelvic pain experience a broad range of symptoms and functional limitations. Some of the most common symptoms include pain or discomfort while sitting, pain during or after sexual intercourse, and painful bowel or bladder function. The origins of pelvic pain are as diverse as the symptoms they wreak, resulting from such conditions as adhesions within or around the pelvic organs and musculature, endometriosis, interstitial cystitis, and trauma such as falls, surgeries, and childbirth.

Sadly, many with pelvic pain feel that the dysfunction and discomfort must be tolerated – that there is no solution. Fortunately, at Pelvic Wellness Center, our physical therapists specialize in this very domain, making it possible for our patients to manage and improve upon symptoms that have existed for months, or even years. We are proud to offer our patients relief from pelvic pain in Lane County.

What Pelvic Pain Conditions Does the Pelvic Wellness Center Treat?

Specialized physical therapy at Pelvic Wellness Center consists of the evaluation and treatment of the following pelvic pain conditions:

Consists of pain or discomfort in the region of the tailbone, often due to trauma of the joints, ligaments, muscles, and/or nerves in this area. Pain most often limits sitting tolerance, but can also affect emptying of the rectum and transitional movements such as moving from a sitting to standing position.

Abnormal pain that occurs with vaginal penetration (during or after intercourse, pelvic exams, tampon use) in the genital, pelvic, or low back regions of the body. Causes of dyspareunia can include muscle dysfunction within the vagina, poor lubrication and/or thinning of the vaginal wall, tissue adhesions, nerve irritation, and/or scarring of the perineal region.

The abnormal growth of “uterine-like” cells in a location outside of the uterus. These cells, or “implants,” are commonly found during laparoscopic procedures in the areas of the ovaries, the Fallopian tubes, the outer surfaces of the uterus or intestines, and on the surface lining of the pelvic cavity. Symptoms may including heavy and/or painful menstruation, cramping with intercourse, and pain with bladder and bowel elimination.

A condition characterized by urinary urgency/frequency, pain around the bladder, urethral, and pelvic regions, and discomfort with bladder filling. According to the Interstitial Cystitis Association, more than 4 million people in the US have interstitial cystitis.

Refers to a disorder of the lower intestinal tract which involves abdominal pain and abnormal bowel movements. Bowel discomfort is often reported as cramping, bloating, gas, diarrhea, and/or constipation.

Tension and pain of the muscles the pelvic floor surrounding the rectum. Symptoms may include pain and/or pressure around the vagina and rectum, as well as referred pain to the thigh, coccyx (tailbone), sacrum, and gluteal region. With overactivity of the levator ani musculature, defecation can become painful, throbbing, numb, or prickling. With this condition, sitting often increases the painful symptoms.

According to the Society for Pudendal Neuralgia, pudendal neuralgia (PN) is “a painful neuropathic condition caused by inflammation of the pudendal nerve.” Pain associated with PN is often located in the perineal, rectal, and clitoral regions of the pelvis. Some patients describe PN as feeling like a foreign object sitting inside the rectum and/or vagina. Other symptoms may include anorgasmia (inability to reach orgasm) as well as disturbances of the bowel/bladder functions.

A musculoskeletal condition that occurs when the SI joint becomes injured or inflamed. The sacroiliac joint links the pelvis to the spine and is formed through the articulation of the sacrum and the ilium in the back of the pelvis. Dysfunction within the SI joint is a common cause of back, buttock, and pelvic pain.

Characterized by an inability to experience complete vaginal penetration due to introital (vaginal opening) tightness resulting from muscle spasm. Vaginismus causes significant pain and discomfort, as well as issues with vaginal penetration such as with sexual intercourse.

Pain located around the vulva without an identifiable cause is known as vulvodynia. Vulvodynia is characterized by burning, searing, “knife-like” pain of varying degrees of intensity, with a highly variable description and location of symptoms. Women with this condition often experience extreme pain during sexual intercourse, difficulties with (or inability to use) tampons, pain while riding bicycles, and fear of gynecological exams.

Are You Experiencing Pelvic Pain? 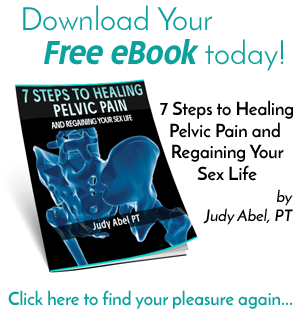 Shannon’s knowledge of the joints, bones, muscles, as well as her taking the time to explain them is superior. She knows what exercises and stretching are needed for improvement and “cure”.

The physical therapists at Pelvic Wellness Center have given me the ‘power’ (i.e., exercises and information) to gain control of my bladder. This is a worthy program and it works!